The Dabbers are back in action on Tuesday as we host Northern Premier League North West Division side Workington AFC in the first round proper of the FA Trophy.

So far this season – Nantwich Town

The Dabbers suffered their first loss in the league in their last outing before lockdown as they were beaten 4-0 at home to high flying Mickleover. Apart from that loss, Dave Cooke’s side made a good start to their season, as they have drawn four and won two of their first seven league games. In order to get to the first round of the FA Trophy, The Dabbers beat Redditch 3-2 in a pulsating game thanks to a brace from Callum Saunders and a thunderbolt from Prince Haywood.

So far this season – Workington AFC

Our visitors have also had a flying start to the season as they sit in 2nd place after eight games. They are yet to lose this season after drawing four and winning four of their first eight games. They are currently on a blistering run of form as they have won their last seven games in a row. This includes an impressive 3-0 away win at Ossett united and a 5-2 thumping at home to City Of Liverpool. In order to get to the first round proper of the FA Trophy Workington breezed past Pontefract Collieries in the Second Qualifying Round after beating them 4-1, then in the third Qualifying Round, they saw off Glossop North End as David Symington’s early goal saw them run out 1-0 victors.

Workington forward Reuben Jerome is currently the league’s second highest goal scorer. Since signing from Ramsbottom in the summer, He has bagged six goals in his sides first eight games this season, including two braces in his side’s victories against City Of Liverpool & Clitheroe.

Jerome isn’t the only player who has an eye for goal in our visitor’s side. Scott Allison has also started the season with a bang, he has bagged eight goals all competitions so far this season. Five of these goals came in his sides first five game of the season. The Dabbers defence will have to be at their best to prevent both Jerome and Allison from finding the back of the net.

Last time the Dabbers got into the first-round proper was back in the 2016/17 season, however we were knocked out by Lincoln City after the now league one side ran out 2-1 winners at what was the Weaver Stadium.

The year before that, we went on our best run in the FA Trophy as we made it all the way to Semi-Final. We were drawn against Halifax Town, the first leg was at home and we lost 4-2 which gave us a mountain to climb in the away leg and we could only draw 2-2 in what was a valiant effort from The Dabbers. Despite not getting to the final it was a monumental effort and one that will live long in the memory of every Nantwich fan. 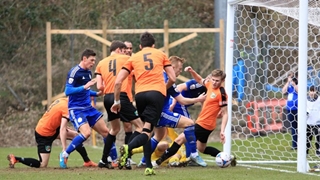 With both sides enduring positive starts to the season it should be a fantastic game at the Optimum Pay Stadium, our visitors will be looking to make it eight wins in a row, whereas The Dabbers will be looking to progress past the first round for the first time since that famous run back in the 2015/16 season.

It also looks like the game will be the only fixture for a while due to the recent news that the season is suspended until further notice so make sure you get your tickets to back the Dabbers as we look to progress into the next round. You can get your tickets here: https://nantwichtownfc.ktckts.com/event/nanfacup02/nantwich-town-fc-v-workington-afc